A long way from research to market 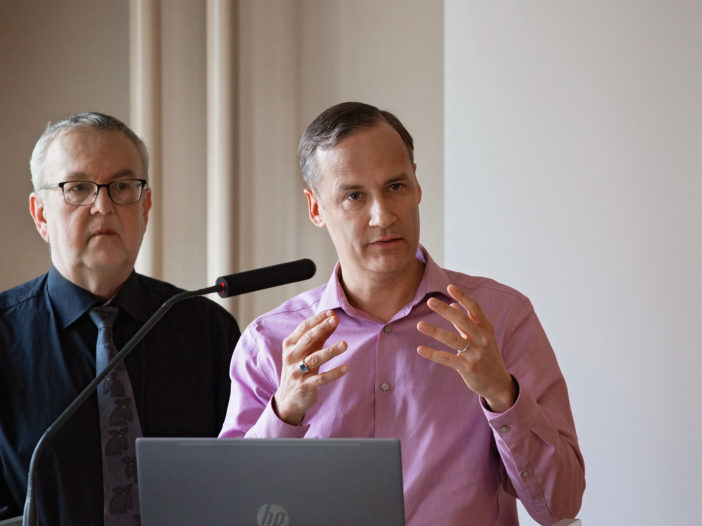 Niklas von Weymarn, the CEO of the Metsä Spring innovation company, and Ilkka Kilpeläinen, the professor of organic chemistry at the University of Helsinki, have been partners at work for more than a decade already. They share a passion for developing a new, ecologically sustainable, and economically effective way to make textile fibre from wood.

Even though the process for making viscose, the best-known wood-based textile fibre, is already more than a hundred years old, the burden and limited nature of cotton fibre production among other factors have especially in the last years opened up new possibilities for wood-based textile fibres on a growing market. Von Weymarn and Professor Kilpeläinen have faced the challenge of making the process as ecological as possible while also commercially viable, that is, sufficiently cost-effective. On the other hand, wood-based textile fibre would be a new export product for the Finnish forest industry which would, correspondingly, elevate the added value to be gained in Finland.

“From the academic point of view, the challenge was, of course, to develop a solvent that would be efficient and safe yet sufficiently cheap and recyclable too”, Kilpeläinen says.

The road to innovation is, however, a very long one and its final outcome is the result of many phases of cooperation.

“For us, it all started in 2006 when we succeeded in dissolving sawdust into organic salt. When I gave a lecture on the subject, the Metsä Fibre research director at the time came to tell me that the process is a very interesting one and asked if it could be brought to the market in a year’s time already. I replied that if that were the case I would not be here giving a lecture. Cooperation started, however, and the first seven years went wondering about things until the first breakthrough came in 2014 and we made some headway”, Kilpeläinen tells.

In 2012, Metsä Group had already launched its own development programme, which is when von Weymarn also moved from VTT Technical Research Centre of Finland Ltd to Metsä Group.

“After much searching, we found our own direction, began looking for a companion in the textile market, and found Itochu, a Japanese corporation, in 2014. In 2018, we decided, together with Itochu, to invest in a test plant. For that, a new joint venture was established. The test plant built in Äänekoski is now in its launching stage”, von Weymarn tells.

At present, the textile fibre project belongs to a Metsä Group innovation company called Metsä Spring created in 2018 which is when von Weymarn came to take it over. The project carried out in the framework of the joint venture is tasked with proving the functionality of a technology that makes textile fibre out of paper-grade pulp in an environmentally-friendly way.

On the track of the value of research

Before one can even begin to consider investing in a first commercial production plant, the production process must be fine-tuned and several kinds of new know-how must be developed in parallel while research must be made into how the market will receive the new product. In the best case, the commercialization of research impressively highlights the value of academic research.

“It is typical for new production processes that their upscaling from the lab to a commercial scale takes place gradually. This is how the risks related to a new process are managed. As things stand, the test plant stage now underway is the last phase before the actual commercialization”, von Weymarn says.

“For universities, the greatest challenge is to understand the real value of research, that is, to grasp the entire scope of what it can be applied on. After all, we too could have just published our own invention in a scientific journal, but to communicate this phenomenon to parties that, in turn, may understand what can be done with the findings is already important in itself. It is not about commercial thinking only. The point is to find the right people who understand the value of an invention and are able to open up gateways to industrial cooperation for example”, Kilpeläinen says.

Genuine interaction as a requisite for the innovation process

Structures that support and create cooperation are central means in supporting innovativity. Sustained cross-border cooperation is required. An innovation process is not a clearly linear one; instead, basic research and industrial research are simultaneously active processes between which there must be cooperation.

“It is essential for Finland that we have spearhead competence in selected fields. This is how interest is generated among other parties in us as a country in terms of both our research teams and the companies in the field. Creating spearheads requires sustained efforts in academic research which is, correspondingly, ensured by sufficient funding. I also find it important that companies take an adequate part in guiding this kind of research for example”, von Weymarn states.

“From the universities’ point of view, it must be understood that cooperation is not a service but a genuine interaction between researchers and those who put various kinds of knowledge to use. Researchers need more in the way of a vision as to all the value that research results may entail. On the other hand, what is required from industry is a long-term commitment since innovations based on basic research take time, and it is not necessarily even a matter of money but of commitment to a joint development and to a shared objective”, Kilpeläinen says.

By accepting cookies, you make your service experience as smooth as possible. Some cookies are used for statistical purposes and others are related to services provided by third parties. By selecting ACCEPT, you agree to the use of cookies. Read moreSettings REJECTACCEPT
Cookiesettings

This website uses cookies to improve your experience while you navigate through the website. Out of these, the cookies that are categorized as necessary are stored on your browser as they are essential for the working of basic functionalities of the website. We also use third-party cookies that help us analyze and understand how you use this website. These cookies will be stored in your browser only with your consent. You also have the option to opt-out of these cookies. But opting out of some of these cookies may affect your browsing experience.
Necessary Always Enabled
Necessary cookies are absolutely essential for the website to function properly. These cookies ensure basic functionalities and security features of the website, anonymously.
Functional
Functional cookies help to perform certain functionalities like sharing the content of the website on social media platforms, collect feedbacks, and other third-party features.
Performance
Performance cookies are used to understand and analyze the key performance indexes of the website which helps in delivering a better user experience for the visitors.
Analytics
Analytical cookies are used to understand how visitors interact with the website. These cookies help provide information on metrics the number of visitors, bounce rate, traffic source, etc.
Advertisement
Advertisement cookies are used to provide visitors with relevant ads and marketing campaigns. These cookies track visitors across websites and collect information to provide customized ads.
Others
Other uncategorized cookies are those that are being analyzed and have not been classified into a category as yet.
Save & Accept